It’s just physics, but it’s so much more.

The original description of a complete mathematical model for estimating cycling power output has to go to Martin. But it was Antoine Vayer’s snarling bulldog sound bites and his collaboration with Fred Portoleau on Not Normal Doping that brought the power estimates and the debate over what the numbers meant into the mainstream’s view.

Although the debate over the interpretation of the numbers is truly just getting started, the method itself is not quite the pseudo-science that some would prefer you believe. Mainly the method is based on relatively straight forward physics; the total power is the sum of the power to overcome gravity, wind resistance, rolling resistance, and drive train drag. Yes that’s basically it.

The details, of slightly simplified version of the equation, look like this:

What is most important though is how the math holds up in the real world. To find out Vetoo collected 250 power meter files from 36 Pro-tour riders over 250 climbs with adequate video footage to mathematically estimate power-outputs. I then took this data set and ran some basic statistics in R and the results were quite good.

As you can see in the figure above, the mathematically estimated power correlated well with the directly measured power meter data. 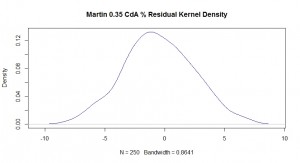 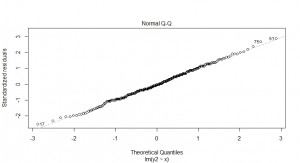 A quick quality check, shows that the residuals are have a reasonably normal distribution without much weirdness going on.

So unsurprisingly to me anyways, it turns out that there is nothing magical about the physics of pro-cyclists. They too follow at least some of the fundamental laws of nature.

Now it is true strong consistent head or tail wind can throw an estimate off by 5-10% or more. But as we can see from the 250 climbs above, this scenario looks like a rare event in Pro-tour races.

The last point to keep in mind, is that most Grand Tours are going to have at least 3-4 critical climbs that decide much of the GC standings. Since the error has a fairly normal distribution, it gets increasingly cancelled as the number of climbs increases.