This study Time Trial Performance Is Sensitive to Low-Volume Autologous Blood Transfusion. by Beldjer et al has drawn some attention by a shocking finding of “ABT of only ~135 ml of RBCs is sufficient to increase mean power in a 650 kcal cycling time trial by ~5% in highly trained men.”

But you have to dive in to a couple details; the most relevant detail is that they took out 900 ml (2 units) of whole blood (washed it, spun it, stored it) and then 4 weeks later transfused back half a unit prior to a time-trial (TT). The result of the TT alone should cause some concern about the study design:

What they should be pointing out is something like, “eh we sort of screwed up the study design and we made the subjects anemic and didn’t allow sufficient time for the anemia to correct before giving back 1/4 of the RBCs we took out.” 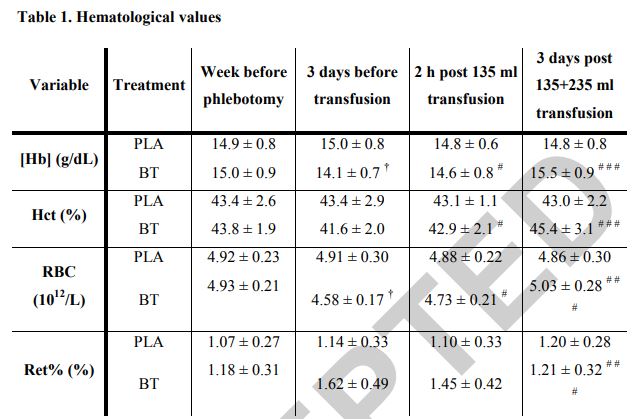 Check out the retic prior to the transfusion 1.62, still well up from the control values (1.07, 1.18, 1.14) so the body is still churning away making new RBCs to try to correct the anemia.

Sure enough the direct measure of Hb mass is still down by 5% (45 gm)  just prior to the low volume transfusion (or down 35 gm compared to placebo condition), which correlates well the baseline TT being down by 5%.

What the authors therefore found is that 5% ANEMIA results in a 5% decrement in TT performance. Makes sense.

So my question here is this: Did the authors actually get the participants to a super-physiologic state with their low-volume transfusion?

Backing up now to do some math:

So a low-volume blood transfusion “doping” study never actually dopes the subjects but only just gets them back to normal physiology.

The problem with that, (besides my grammar here) is that the effect of correcting anemia may not represent what happens when the Hg mass is raised to a super-physiologic level. It does make sense that there will be some benefit but it also makes sense that there will be some saturation of potential benefit going super-physiologic vs correcting anemia.

Likewise, these “highly-trained men” are only putting out 220 watts for about 40 min. It makes sense that the benefit that a true elite athlete might saturate some vs these (sub-cat 4/5) participants.

How much benefit a half-unit transfusion would give out in the real world is a question not really addressed by this study. Maybe it indicates a ceiling to the effect around 5% or less.